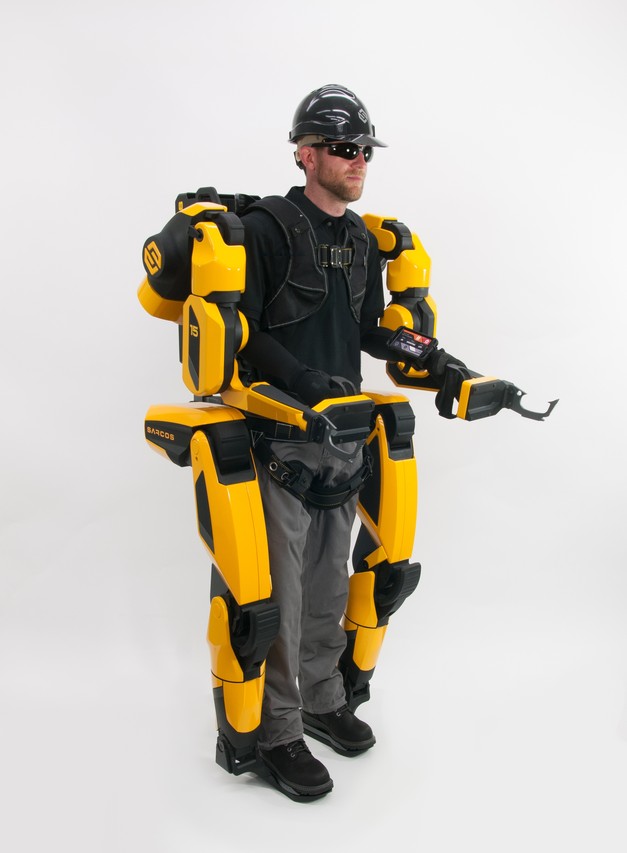 There’s a great article on the Wall Street Journal about industrial unpowered and powered exoskeletons that got me thinking about this. But it’s behind a paywall, so my brief take on it below.

Well, I’ve been talking about this for a while. I’ve based my original trilogy on the concept, too. What is it? The birth of the human augmenting powered exoskeleton; an innovation that will revolutionize both industry and warfare.

Paired with a controlling AI, this is the counter to “Terminator.” It will also make conventional infantry more or less obsolete, and will trigger a new arms race. Imagine, most of the small arms in the world (and unarmored humans) will become obsolete against these new armored armies.

It doesn’t take a lot of imagination to picture one of the suits pictured above (the Sarcos Guardian XO) fully enclosed in armor with an array of weapons, both lethal and non-lethal.

This is also a counter to the age-old arguments against women serving in infantry units. It is true that the average woman doesn’t have the upper-body strength of the average man. Upper body strength is completely necessary to lift and carry 50 odd kilos of weight along with weapons and have a reserve left over for the fight at the other end. Powered fighting suits render the old biological differences moot.

All that is required is hand-eye coordination, basic intelligence, discipline, training and courage. Women have as much potential as men in those categories, so wars in the future will be fought by both sexes across the board.

Think as well about the law enforcement applications. What criminal is going to want to shoot it out with one of these? I guess the Darwin Factor would get rid of the really dumb ones, but the smart ones would put their weapon down and their hands up.

The only thing holding this back is a power source. Once that’s cracked, Katie bar the door.

From the female draft to 2nd Amendment questions, this is going to shake things up both in society and the military.

Take it to the bank.

2 thoughts on “The powered fighting suit is coming”