When I wrote the first book in my trilogy, In The Valley, I imagined a future where combat leaders had instant access to tiny drones that provide communications, recon info, and would be controlled via a wireless internet connection to the user.

The future is coming faster than I expected. ISIS is using mini-drones in combat now, they are dropping mortar rounds via drones on friendlies in Syria. They are also using them for recon. The US Army is experimenting (a lot) with small drones, there is a lot of thought and money being directed toward this technology.

So it peaked my interest when I came across an article today where a company is trying to market such drones to the military right now. “Will tiny drones become a must have for soldiers?” LOL, hell yes, was the answer that popped into my head.

Mind you, the “Snipe” is bulkier and clumsier than the drones I imagined for future combatants. However, it is still an application where the infantry soldier can deploy a drone to look around corners, behind buildings, over terrain features, etc. It is only a matter of time before such little drones become weaponized. In the case of ISIS, the bad guys have already done it. 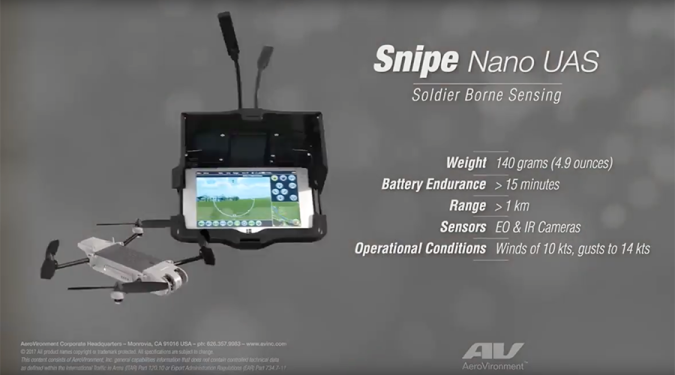 This is a first-generation view of the future. I don’t know whether to be excited by this, or to be leery.

The old methods of reconnaissance will (possibly) soon be obsolete. No more “recon by fire,” no more stumbling into an ambush. The Snipe has a thermal camera, have fun hiding from that.

And sure as the devil, both sides in future conflicts will have access to this technology. I’m not a big fan of unproven technologies when it comes to combat operations. When the bullets start flying, Murphy’s Law prevails each and every time. However, this technology is so promising, so game changing, that I am convinced it will be widely used far into the future.

Humans are always looking for anything that will give them an edge in both love and war, and this technology will deliver. Clausewitz‘s “fog of war” will be rendered less dense by these little machines.

It’s a matter of time and refinement.

5 thoughts on “Micro drones in combat”