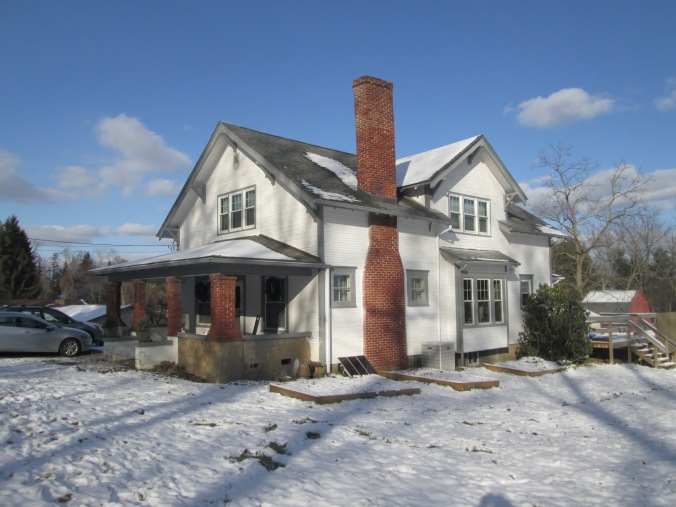 Well, the winter is off to quite a start. This morning I looked at the thermometer on the porch and it read a positively balmy four degrees F, or -15.5 C. Excellent. I went around and made sure all the the animals had unfrozen water, always a struggle at this time of the year. This is by far the hardest cold I can recall this early in the season, and it’s rough.

Have I mentioned that I hate the winter? Snow and cold makes everything tougher to do, and some things impossible. Not to mention the expense of heating the house, and the dread that the power may go out during a snowstorm. In that regard, we are more fortunate than many in that we can burn wood if the need arises. We keep a healthy stock of firewood just for such an eventuality, in fact.

The sunny sky in the picture above is misleading. It actually heralds frigid cold in that there are few clouds to keep a layer of insulation on the ground, and at night the stars are cold, hard and distant points of light. The snow crunches under your feet, and it never melts. It also makes it so that you have to really bundle up just to walk the dog. And Dixie the family mutt seems to love to go outside, especially when it’s cold.

I don’t know what stuff dog paws are made of, but I wish my feet were that tough. Doesn’t seem to bother her at all.

Traditionally, this is the season where I do all of my heavy lifting in regards to writing. This winter will be no different. Have already worked on some pretty cool projects, and I anticipate more work along those lines.

I also keep up on my reading this time of the year, right now I’m finishing up a book called Absolute War, a study of the fighting on the Eastern Front in WW2. It’s pretty good, even though I liked Merridale’s Ivan’s War better.

Yeah, I’m sitting here whining about the cruddy snow and cold, and then I read those books. Fighting in minus 20. Single operations where the Russians took more way more “irreplaceable losses” than the entire list of US dead from the Vietnam War. Hell, some operations cost them more dead then all combined US forces fatalities during WW2 in its entirety. Single operations. 450,000 dead or “irrecoverable.” Bad stuff. You should read about it. Sobering.

Really makes me enjoy my warm house and more-or-less peace.

However, by some fluke it is colder here right now than in Moscow. Strange but true.

I am positively jealous of my Australian friends who are soaking up the sun and going on Christmas forays to the beach. Well, enjoy it y’all. And crack a cold beer and a smile when you think of us in the North, half a world away.

One of these winters I’m coming to Australia. Take it to the bank.

4 thoughts on “Dreaming of Australia”