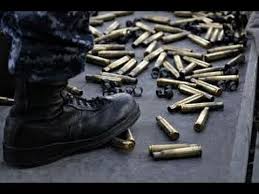 There’s been way too much of this mass shooting bullshit happening lately. Way too much.

The latest case was an asshole who shot up a veteran’s home in California. What’s more disgraceful was that the shooter was once a soldier- he foreswore his oath and disgraced his uniform.

If I had the opportunity to put a noose around his neck, I would have. This piece of garbage shot three defenseless women who had dedicated their lives to helping veterans in need- his ostensible comrades, brothers and sisters.

I hope he burns slowly in hell.

All the mass shooters are worthless bags of human pus. I guess what I hate most about this loser was that he and I shared the same uniform, we breathed the same dust. We even had overlap time in Afghanistan.

His case makes me want to vomit.

I have special reasons for thinking this.

Number One: He just fed into the perception that people suffering from combat trauma are hair-trigger crazies, time bombs waiting to go off. Asshole, thanks. There are hundreds of thousands of us who do not fit that description at all. We served honorably and took home scenes and situations we’ll never forget. And now we get to get tarred with the same bullshit brush this jackass dipped in a bucket of shit. Fuck you, ex-Specialist Wong.

Number Two: When I go up to the VA for trauma counseling, it’s a special place. A refuge where I can unload about issues I’ve had. I can speak to a professional who really gives a crap about me, and she understands my story and the hangups and issues I’ve encountered. Now this asshole has created a condition where the professionals who treat combat veterans always have to be on edge, wary of those they are trying to help. Thanks, dickhead.

Number Three: I don’t know about piece of garbage ex-Specialist Wong, but my time in hell taught me that life is fleeting, precious. I don’t know much about his case, but I do wonder if he had PTSD issues, or anger issues. If he had an anger problem, this would explain why he was ejected from a PTSD treatment program- they are not the same thing. I never associated anger with combat trauma- what I feel is a deep sorrow. Wong felt zero sorrow when he greased a pregnant woman, and then as a bonus shot two more women. Prick, this is the shit your former enemy, the Taliban, does for fun. You just sank to their level.

Number four through one million: Asshole, we serve to protect civilians. Dickhead, we go through hell so they don’t have to. Fucknut, we swore to defend the United States. Ex-Specialist, you violated every one of these sacred duties. You fell off the sanity tree and hit every lunatic branch on the way down. Your dead ass deserves no sympathy, no memorial, nothing but disgrace.

As I said before, I am really sick of this type of thing.

There is no joy in killing, just emptiness.

Who wants a society where life has no value?

They need to be stopped.