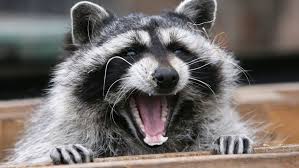 Been keeping pretty busy these last days. Doing research for latest project, giving that a great deal of thought. Took some time just now to scan the news, and I came across an article about zombie raccoons in Ohio. Seriously.

Whoa, crazy times we live in. You can go through a long, long list of strange and disturbing occurrences, but I had seriously never considered raccoons run amok.

I guess I should have. After reading the article, I realized we’ve had our own run-ins with the zombies. Last year or so, we spotted a ‘coon in the daylight, which is very odd. I told my kids to stay away from it, and we eventually found it quite dead in the doghouse, of all places.

Maybe that was the first sign, a troubling omen.

This could be it. If you are in the mood to participate in the making of a book about the apocalypse, by all means check out John Birmingham’s unnamed end-of-the-world project.

If enough readers suggest it, he may even include zombie raccoons.