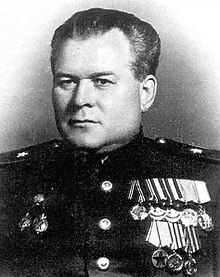 Looks like a pretty standard photo of a Soviet flag-grade soldier, approximately World War Two era.  Just goes to show you what horrors lurk beneath seemingly prosaic images. Today’s piece was inspired by the reading I did in “Bloodlands,” a book I discuss in the post below.

The man illustrated in the photo above is Vasily Blokhin, history’s most prolific mass murderer via direct involvement, i.e. pulling a trigger or tightening a noose. In his case, it was usually pulling a trigger, although I am sure he got more creative on occasion.

This guy makes Jeffery Dahmer or John Wayne Gacy look like pikers, kids at play. In one night on just another day he killed more people than those two sickos combined and multiplied. Blokhin is an indictment of the Stalinist era, the embodiment of tyranny run amok.

He would look more in character if his official image showed him dressed in his working garb, a blood splattered leather apron, long leather gloves and a leather hat.

I’ll throw a statistic out there that gives the magnitude of exactly how big of a sociopath and freak this guy was.

In April of 1940, a decision was reached by Stalin that all of the Polish officer POWs in Soviet hands should be liquidated. Blokhin got his orders. He packed some sandwiches and vodka, and a suitcase full of German Walther pistols. Over the course of the next 28 days, he averaged one execution per three minutes with a self-imposed quota of 300 per night. When the last shot rang out in the specially insulated execution chamber, Blokhin had personally shot in excess of 7000 prisoners. Doing the math, he must have run short on quota on one or two nights. Wonder if he was tired, or just ran out of ammo. In any case, I’ll bet he was pissed when he ran out of victims.

And this is just his most famous and well documented killing spree. Who knows what lurks in the state archives of the former USSR.

To add insult to injury, he lived to old age and eventually succumbed to “psychosis.” His official death certificate says he committed suicide. Couldn’t have happened to a nicer guy, really.

This gentleman holds a Guinness World Record for killing, and post-mortem he has a small measure of notoriety. I know of at least one work of fiction where he was a minor character, John Birmingham‘s Axis of Time books where he made a true-to-life cameo as Stalin’s head executioner.

Blokhin was a denizen of the Bloodlands, a ghoul that haunted its ruins. The Nazis deserve their murderous, hideous reputation, and the Soviet NKVD should be spoken of in the same breath.

Seriously, where do they find these people? Do their historical eras make them? Do they find the “job,” or does the job find them? If you’re looking for a Blokhin, what do you do, place an ad in the Sunday paper? What? “Soulless psychopath wanted, must look like an ordinary Joe. Interesting and rewarding work.”

Probably the most frightening part is that I’ll bet Blokhins are probably easily found and cultivated, and they’re on the payroll of numerous entities and governments. Mostly I suspect they’re usually kept on a tight leash, unlike in Nazi Germany or Soviet Russia.

The good news? They are mortal, just like all of their victims. The Walther he loved could have been turned against him.

Eventually, it was. And he pulled the trigger. Probably. One never knows with official Soviet documents. I wonder if he took his own life with the same equanimity that he displayed on so many other occasions.

Who knows, who cares. He’s gone.

But what monster will break his record?