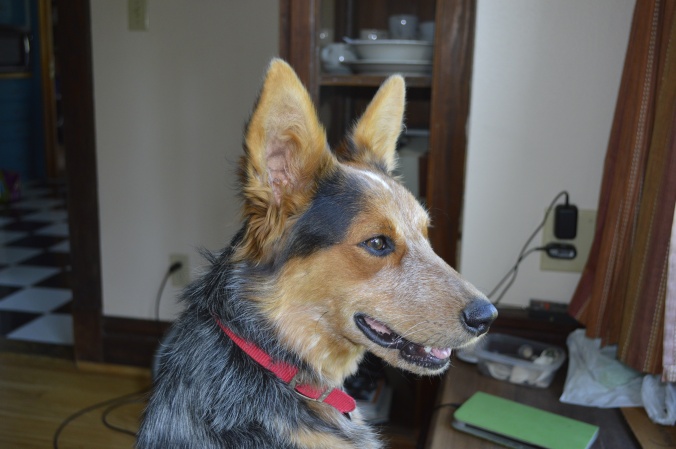 Long time readers will be familiar with this dog. She is Dixie, her breed is purportedly “Stumpy Tailed Australian Cattle dog,” but I have my doubts. She looks as if she has a healthy dose of mutt in there, too. Probably some Australian Shepherd as well. What a coincidence that a large portion of my reader base comes from Down Under, and I have a dog that may have some dingo lurking in there.

So I was reading the news and I came across a lovely article about a dingo that was rescued, it seems it was attacked and separated from its litter by a large bird. The unlucky/lucky puppy was carried away for lunch, and something distracted the hawk or whatever into dropping it onto a family’s lawn, where it was found.

The authors of the article seemed to believe that purebred dingoes are a rarity, and that may be the case. They certainly seem to interbreed with regular dogs without qualm; so I can imagine that finding a purebred would be pretty tough after 200 odd years of interbreeding.

Well, we have wild dogs over here, too, although they are rarely seen. The coyote. They are everywhere, and on still nights it isn’t uncommon to hear their eerie calls and yelps as they chase deer through the forests around here. They are smart and wily as hell; there’s a reason that they flourish while other species wane and disappear.

So yeah, I’m tempted from time to time to do a genetic test on Dixie, just to see what’s in there. I’ll bet her genetics look like mine; purebred, complete and total mutt.

That’s a good thing, as far as I’m concerned. Purebreds seem to have no end of trouble and physical maladies, there’s something to be said for genetic diversity. As I watch her antics in the house, I’m thankful for what she is, a playful, healthy and probably happy 18kg ball of wiry energy. A specialty of hers: for no good reason she’ll jump up and run laps around the living room, springing from one piece of furniture to the next. This really cracks me up, it’s so random.

So whoever it was in the distant past who chose to chuck a genetic hand grenade into Dixie’s bloodline, thanks! You really did me a favor.

Maybe Dixie’s not any sort of proper breed, but she’s a fantastic dog.