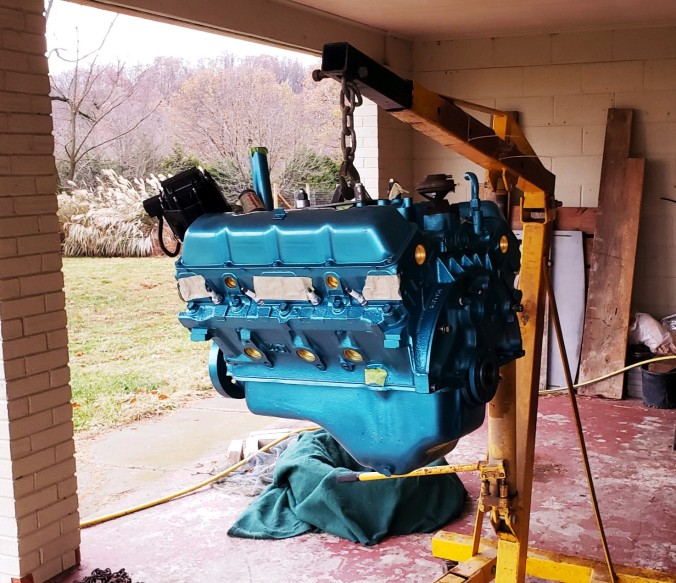 It helps to have a truck. To be specific, a fairly reliable Chevy. In the year that I lost my license (2012-2013), or rather the year that the VA and the DMV conspired to deprive me of driving privileges, I bought a truck. Yeah, pretty counter-intuitive. No license, new truck. I won’t say that it made sense because it didn’t. But hey, here we are six or seven years later and the beast is paid off and still doing the job. So on balance things ended up working out, and there’s a reason I bought the truck.

A close friend calls me up.

“Hey, Jason, can you haul something for me?”

Turns out he needed a big-block engine hauled from the heart of the Appalachians to the East Coast. OK, I wanted to hang out and catch up, so this seemed like a good opportunity. All that I knew was that we were picking up a motor, throwing it in the truck, and hauling it north.

I linked up with my bud on Saturday morning, we headed south. There was a foldable shop crane in the bed, along with a toolbox and our overnight bags. The crane was for the engine, that chunk of iron weighed about 250kg.

250kg/500lbs? Well, we weren’t going to wish it off the ground. So we needed the crane. Oh yeah, there was a tire with no rim as well, so that the motor didn’t go sliding around in the back in case I had to hit the brakes. I’ve had that happen before; a heavy engine can literally make the rear end hop if it hits hard enough, and there will be damage.

So we linked up with another friend at the rebuild garage. I was unprepared for what it was that we were picking up; a freshly rebuilt and tested, fully functional and lovingly restored monster V8 engine. Its home was destined to be a vintage Jeep Cherokee.

I almost swallowed my teeth. I wasn’t hauling just any large chunk of iron; I was returning an expensively and extensively restored classic motor to its home some six hours away through rugged hills, bad weather and a couple of mountain passes.

My pulse picked up.

My spare tire to keep it from rolling suddenly seemed wholly inadequate; the motor had a snazzy billet distributor just waiting to be snapped off, and all number of protruding things that could easily be trashed with careless driving, sloppy tie-down, or a sudden stop and a weak cargo strap.

As we loaded and braced it, my mouth went dry.

How much had the owner paid for this rebuild?

My shaking hand turned the key in the ignition, the Chevy came to life. With slightly blurred vision, I backed away from the garage and started navigating my way through the windy backroads as my friend’s “bitchin’ betty” called out directions through his phone’s tinny speakers.

Good thing I wore my hearing aids. There were a million turns.

I went slow, slow. At each curve I anticipated the dreaded THUNK-CLUNK of a rolling engine, my eyes darted again and again to the rear-view mirror. Finally, we reached the highway. Now I could go reasonably straight. We merged into traffic, I pressed in the gas. The Chevy acted as if the iron in the back of the truck wasn’t there, it took off. I set the cruise and kept it at five miles/8 kph under the limit. Finally, my pulse slowed, I had saliva again and I settled in for the drive.

My buddy played a pretty funny comedienne through the AUX player.

Long after sunset, we arrived at our destination. It was raining and cold, but the tarp on the engine had held. Most importantly, the motor hadn’t shifted so much as a millimeter.

“The hell with it, we can unload this thing in the morning.”

I couldn’t have agreed more.

We went into the charming 19th century brick house, the engine’s owner treated us to the most amazing cup of hot apple cider I’ve ever had. I slept the sleep of the dead.