Alright, so I’m in the process of gathering material for my upcoming Australia trip. The vacation may or may not happen because of COVID 19, or the Corona virus. But that’s OK, I’m proceeding as if I will travel and about a week prior to my departure date I will make a final decision and stick with it. This is a real pain in many respects, but I don’t have a lot of choice in the matter. So, the part I can control, the preparation, proceeds as planned.

I have found some amazing lightweight and very functional camping gear. As longtime readers know, the US Army is currently going through a camouflage pattern change, so they are unloading quality gear at pennies to the dollar. And I mean quality, excellent first-rate stuff.

Today I chose to write about another one of these deals, an awesome little backpackers tent called the “Improved Combat Shelter.” See image above, I ordered one and put it together in my living room.

Why did I order one? Well, I’ll tell you. And then I’ll recommend that you get one of these if you like to camp.

First, let me say I did not order this tent because I was familiar with it from my time in the service. I never saw one of these, ever. I was issued this piece of WW2 crap, the Shelter Half. 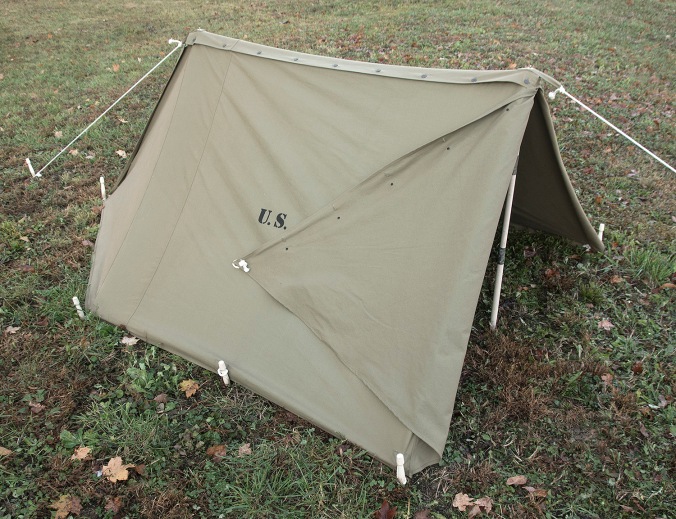 Yes, they still hand these out. They are the worst tents in the world, and they were designed by monsters. Only a real masochist would go out in the woods with one of these, or someone who means to torment someone else would hand them out.

You are far better off with the humble poncho and a piece of 550 chord strung between trees. Seriously. If someone offers to sell you a Shelter Half, run away screaming.

Poncho hooches are OK, but if I was ever issued the “Improved Combat Shelter,” it would have been awesome.

I don’t know who got these things, but it wasn’t me. And now they are being unloaded on the surplus market for 59.99 USD.

At this price you need to buy one of these right now, surplus has a way of drying up.

A few first impressions when I cracked open the vacuum sealed bag. The tent stank like US Military surplus, they use a preservative chemical that stinks somewhat like cat pee. Don’t worry, this is normal. Just make sure that either no-one is around or that you air it out outside.

Then I looked at the material this tent is made from. Good Lord, genuine ripstop nylon, the same as the rugged, unbeatable USGI poncho. The tent was used, but pretty gently. Everything was included and in good shape; top quality like the tent material.

As I assembled it without the included instructions (none really needed), I marveled at its ease to throw it up and once again at the pure quality- the shock poles were excellent aluminum, the tent stakes were even first rate. This was a tent designed to be used in all four seasons, not just at a kid’s sleepover.

And something the ad doesn’t show is that this tent has a huge vestibule on the weather side, and the tent can be exited from either side. The vestibule is great for storing gear, and is very handily designed. This is a soldier’s tent.

And have I mentioned the quality? Everything was first rate, including the zippers, all of which worked. I closely examined the tent for defects, as you should always do with surplus, and at least on this example found no problems.

Heavyweight material, USA made (how often do you see that), small and compact. What more could you want?

BTW, I measured the inside, it’s about 32 inches wide and about seven feet long. So, in a pinch you could fit two adults if they were friendly.

If you are in the market, I can’t think of a better, more economical tent. Seriously, even if it may need minor repair (a possibility). Something kind of like this will cost you about fifty bucks at a big box store, and it won’t be anywhere close to as good.

The only caveat is that these have been used by soldiers and they are surplus. If you buy one, set it up and inspect it carefully. If it passes muster, you have one hell of a piece of gear.

I think one of these may be headed south.

Provided circumstances allow me to travel.

One thought on “An Amazing Deal”