OK, here we all sit in the midst of this disaster, some of us with greater degrees of misfortune than others. I am cognizant that we’ve been doing a little better than many; this is one of the reasons I’ve been talking about some of the stuff that keeps us busy. What I do seems to help, if you can give some of this a try. Gardening, exercise, and writing, all activities that keep one busy. Work, of course, if you have it. Anything to keep the wheels turning in this amazing year of 2020.

So I’m going to talk a little space news first. SpaceX has been on a real tear as of late, with SN5, the launch of yet another Starlink mission, and let us not forget the successful conclusion to the Demo-2 mission. Real progress is being made; most importantly Mr. Musk and crew have spurred on real competition with other countries and entities. This latest space race is what we’ve needed since the nineteen seventies and it’s what we didn’t have.

Bad stuff? Well, I don’t dwell on that but some things must be mentioned. The Corona disaster is the biggest problem, and it’s one that looms over everyone. So no need to go into depth on that; if you want to find out more than you ever wanted to know simply Google “Corona Virus.” Here, I’ll help. Alright, that’s out of the way.

Beirut. Seriously. Who thought it was a good idea to store three KILOTONS of ammonium nitrate in the heart of a city that has had more than its share of grief? Wow. There are tactical nuclear weapons with smaller explosive yields, for heaven’s sake. Ammonium nitrate is no joke.

A story from my past.

So I had to qualify in Army demolitions once upon a time. I had the mission to destroy a road. Fine. Buried five “cratering charges” in a row across the road. A standard “triple nickel.” Five cratering charges, five feet apart, five foot deep. Three fives, right? A triple nickel. Wired everything together with det cord, used C4 as the intiating charges, ran a seriously long shock-tube fuse to a bunker.

A cratering charge is 40lbs (20kg) of ammonium nitrate. So the road was mined with 200 lbs of explosives, plus a little C4 to set things off.

1/30,000th the net explosive weight of the Beirut charge.

When I set it off with a twist and pull of the fuze ignitor, the roadway disappeared in a filthy black mushroom cloud, the explosion was deafening from 500m distance. Inside a bunker.

A large clod of dirt landed on our rucksacks, hundreds of meters away. It flattened them.

When the smoke cleared and we went to look, there was a crater large enough to put a house in.

But I digress. I prefer to spend the mornings wandering amongst the vegetables, feeling and looking for what is ripe. My favorite part of the garden is the large three sisters patch; Indian corn, climbing beans, and pumpkins. This land’s natives knew what they were doing, for thousands of years they cultivated these three crops in mutually sustaining patches.

The corn takes nitrates from the soil, the beans add nitrates and use the corn as a trellis, and the pumpkins drown out most of the weeds in the patch, plus provide easily stored nutrition for the long winter to come.

I love the Three Sisters. It is the ultimate lazy man’s patch, and its productivity is second to none. We have taken multiple harvests so far, the beans and corn are delicious. 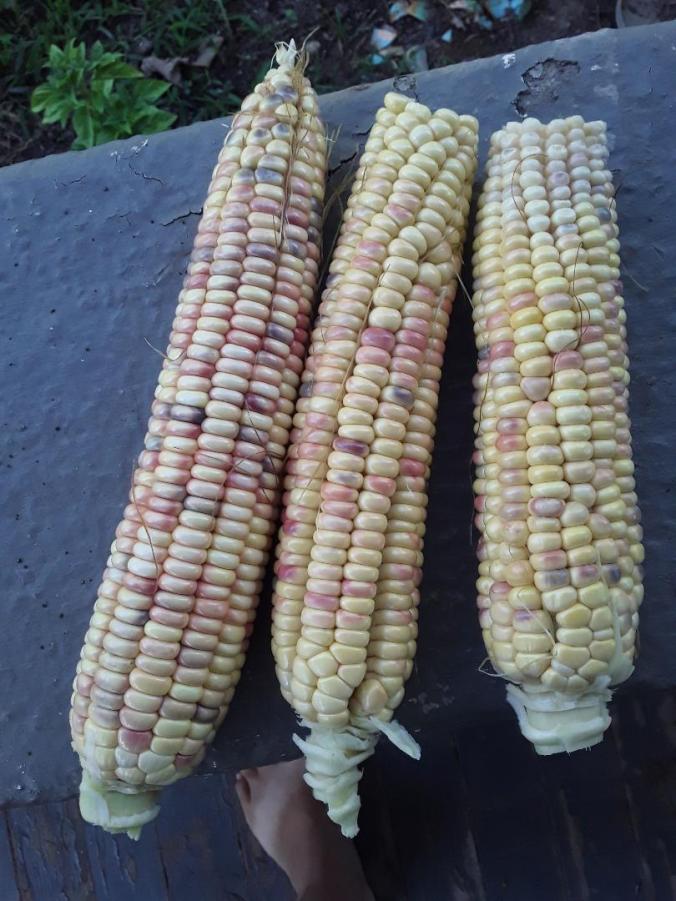 Above: Indian corn at its peak freshness for “on-the-cob” eating.

I’m really looking forward to the johnnycakes from the cornmeal harvest this October. There is nothing like peeling back an ear of seasoned Indian corn, each one is different and each one is beautiful. And the smell… one of the staples of my childhood, along with cow shit and fresh-mown hay.

Hey, at least there’s something to look forward to, in this bleak and frightening year.

So if any of you have even a tiny patch of land, try out the Three Sisters next year (or this year, for my friends in Oz). Any variety of corn will do (although I prefer non-GMO heirloom stuff), along with some type of climbing bean and spreading pumpkin.

Gardens. Good for the soul.

One thought on “The Three Sisters”