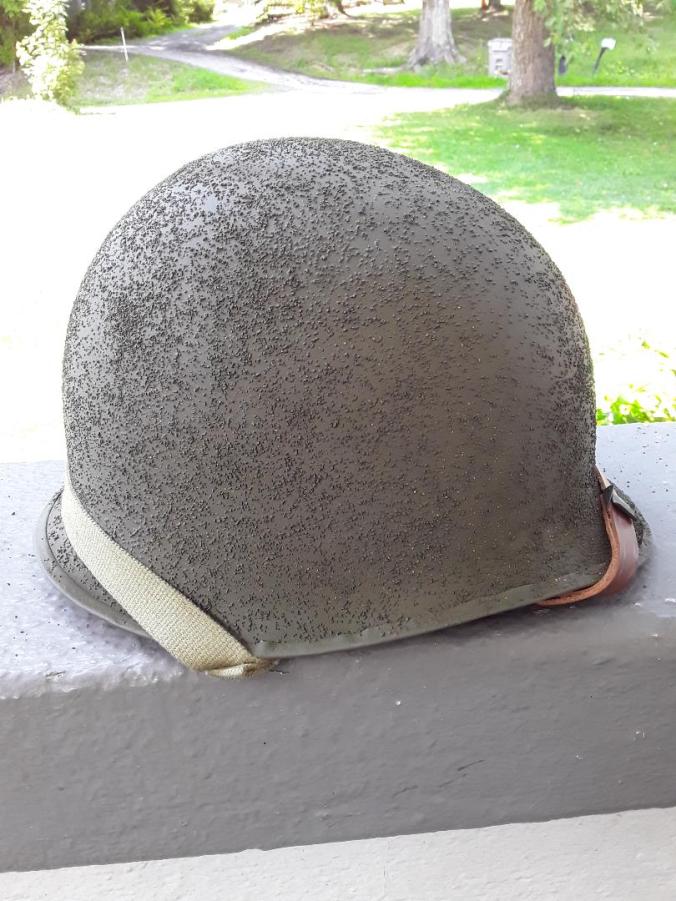 OK readers, I’ll confess to a very 2020 weakness. I don’t think I’m alone in this, either. Lots of people are spending a lot of time in front of a screen. Here’s my version.

My sleep patterns are all messed up for various reasons, mostly unseen stressors. Stuff that may be logical, and maybe not. 2020 is a year that feeds into our worst fears, that saps the joy out of almost anything. So what do I do in this time of disease, disaster and strife?

Besides writing, I internet shop late at night/early in the morning. Visit various sites, fill up shopping carts and usually I don’t check out. But sometimes I do, for the oddest of things.

An example is pictured above, a US M1 helmet, manufactured in March 1942.

Why the hell did I buy an antique helmet.

Well, because I could, I guess. But that’s a pretty unsatisfying answer.

There are other reasons.

First, let me say that I am utterly uninterested in relics from my own war. I had plenty of opportunities to collect, and I usually didn’t. I did bring home a thing or two for interested friends, but that was about it. But the rest of it? Junk. Dirty and worthless junk.

I dunno, maybe the stuff from the Greatest Generation (who BTW did not see themselves as such) is cooler, or the negative aura has worn off with time. You’d be surprised how much of the stuff produced in WW2 is still floating around, it wouldn’t surprise me at all if some of it was still in use.

In my earliest service we still had the M1 helmet (see above), the ubiquitous mess kit, the M1911A1 pistol, along with the M3 Grease Gun. All WW2 relics. 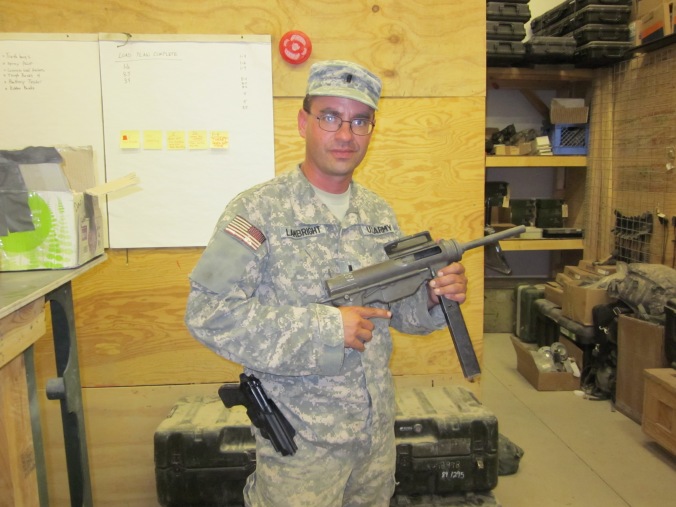 OK, the Grease Gun stuck around for the longest. The picture above was from 2011, we actually used that little submachine gun in combat, manufactured May 1945. But I digress.

So yeah, my entire life I have had the detritus of the World Wars around me, our hay barn was full of the stuff. Our hay barn? Yeah. The hay barn.

Cars (including a Ford Model A), boxes of various relative’s household goods, and footlockers and duffel bags of USGI equipment.

Of course us boys went through the cool Army stuff, it dated from WW2 to Vietnam. I remember a helmet with a sewn-on chinstrap, frayed from heavy use. The helmet was probably my Grandpa Lambright’s from WW2. Regrettably, it was lost when we moved off the farm.

I remembered that helmet late one night as I rummaged through the internet’s attic.

I had to have its clone, in memory of my long-lost grandfather.

This being 2020, you can get whatever you want on the internet. It’s a question of how much you are willing to pay. Early in the morning, when the dark thoughts steal across the hindbrain, I needed a distraction. I needed to replace my grandpa’s long-lost helmet.

So I struck and got one just like I remembered.

The helmet arrived, refurbished and ready for a war seventy-five years gone.

It has assumed pride of place among the other helmets I’ve accumulated over the years, other lost shards of the World Wars, usually sourced via inheritance or yard sales.

When I look at the old helmet, I wonder how my life would have been different if I would have known my father’s father. Or my mother’s brother, lost in Korea. They are ghosts, vanished in time, with only black and white faded memories remaining. A few pictures in a musty album.

I hold this helmet, this relic, and I shudder.

I see a tracer round as it streaks by, impossibly fast. It nearly took my life.

A few inches to the right and I would have been a ghost, too. Maybe less. For every tracer there are four rounds you don’t see.

When I think of this I want to scream.

Just the sound of the touch pad clicking away.